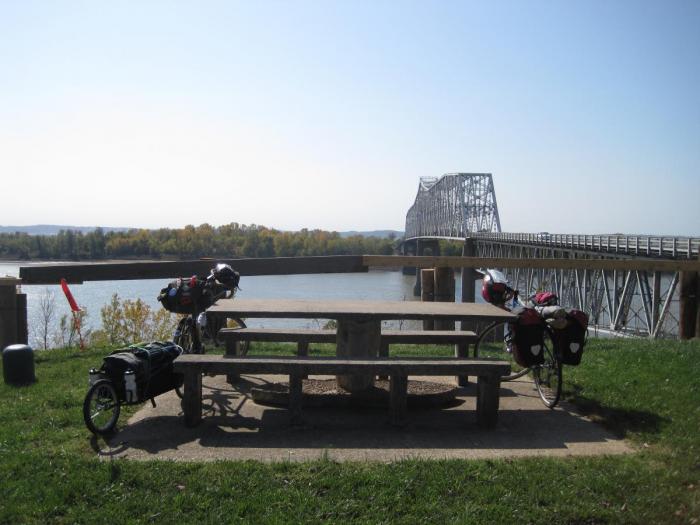 Basking in the glory of the Mississippi River
The last five days of biking took us through the whole state of Missouri, the crazy hills of the Ozarks, across the Mississippi River and into the state of Illinois. We've stayed in some of our nicest accommodations, met even more cyclists and locals, and both enjoyed and struggled with strong winds. Above all else, we have continued to enjoy the beauty of the fall colors and the blissful daily temperatures in the 70's and 80's. 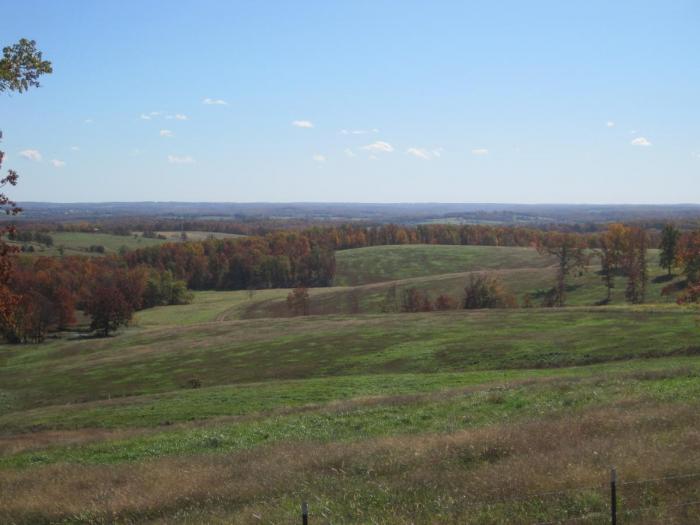 We left Hartville Thursday morning after enjoying breakfast at the LJD Cafe (where we had spent the night in the basement). I had a delicious homemade cinnamon roll and Don devoured the largest stack of 3 pancakes that I've ever seen. It was an impressive undertaking. The weather was nice and the ride was short, but the hills were consistent, long, and steep. We biked less than 40 miles into the town of Houston, where we were thrilled to check into a hotel and enjoy the second half of our rest day. Spending the whole afternoon off our feet helped prepare us for the 9 straight days of riding that will land us at our next rest day in Berea, Kentucky. 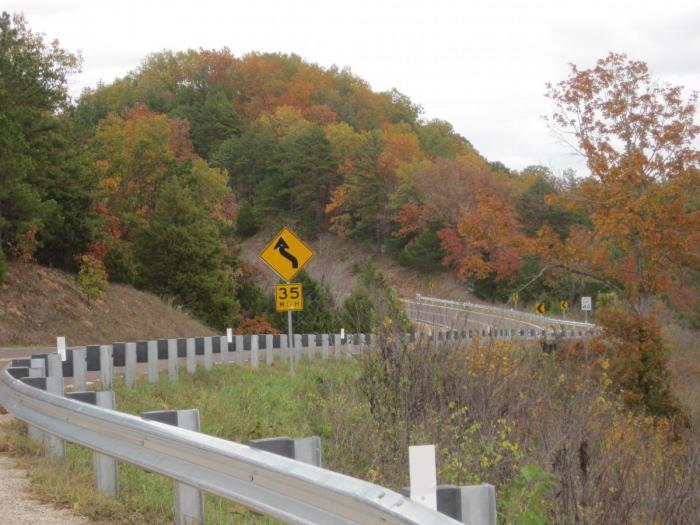 On Friday morning we woke rested and ready to take on the Ozarks. Little did we know that our 71 mile ride from Houston, MO to Ellington, MO would be the most strenuous cycling that we have faced. The hills were unceasing and some were so steep that they seemed more like solid walls of pavement than hills. It also happened to be some of the most beautiful cycling we've enjoyed. The "National Scenic Riverways" in Missouri are peaceful, colorful, and quite isolated. We stopped for lunch in the small town of Eminence (and waited out a short rainstorm) before making our way to a Warm Showers home in Ellington. After arriving at Wayne and Betsy's home (they live at the top of a very steep, unpaved road) we were treated to a delicious dinner, beer and wine over a  baseball play-off game, and the most comfortable bed I've ever slept in. And then, breakfast in the morning! They were fabulous hosts and a lot of fun to be around. We also happened to be there on the same night as a Korean cyclist named MoonYoung, and it was fun to share stories with one another. 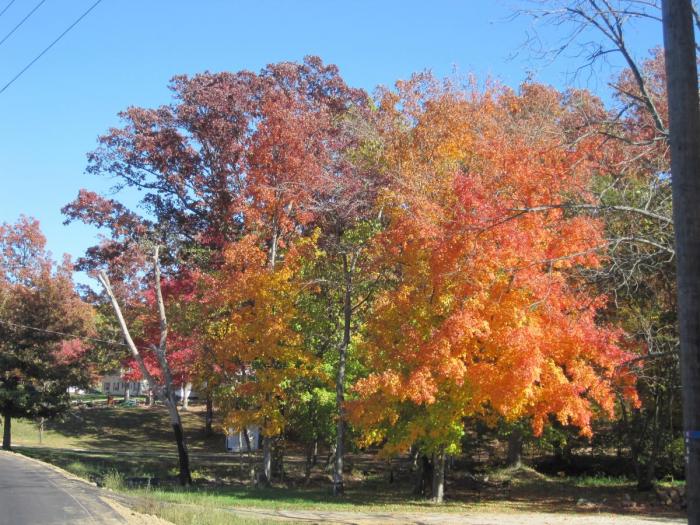 As we rode East from Ellington we gradually moved away from the Ozarks and into a fertile land of rolling hills and wineries. We made it a shorter day (only 61 miles)  in order to stay in Farmington at "Al's Place," a famous bike tourist hostel that we had heard was worth stopping for. It turned out that the hostel deserved all of the hype it had gotten. You really can't set your expectations too high for this place. The building is actually an old prison, but it has been completely remodeled in honor of a local bicyclist named Al who lost in his fight against cancer. It is clear that someone has put a lot of thought into making this a place of respite for weary travelers. There is complete privacy, tons of amenities available, the place is spotless, and it is all available for a suggested donation of $20. We had a wonderful evening full of delicious treats and lots of TV. and music. 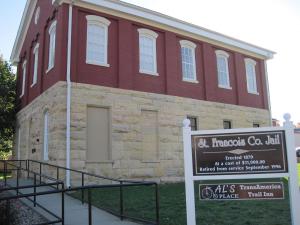 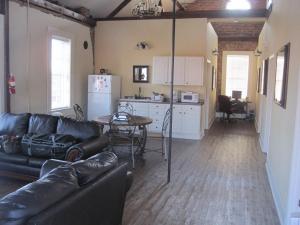 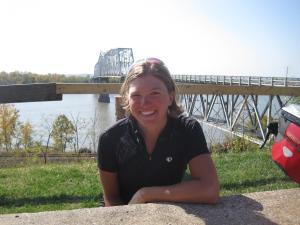 Yesterday's highlight was crossing the Mississippi River and biking into Illinois, our third-to-last state on our tour across the country. There was a 10 mile section of land near the river that was very flat and it felt great to be cruising along without a hill in sight. Unfortunately that didn't last for long. Once we got into Illinois the hills returned, and they weren't quite as short or gradual as we had hoped. Most of the day was clear, with some occasional strong winds, but dark clouds began to roll in as we neared Murphysboro, our destination for the evening. It never ended up raining on us, but the wind was fierce throughout the night. We camped in the town park after getting permission from the police "supervisor." All in all, we were glad to leave town in the morning, as nothing seemed to really go our way while we were there. 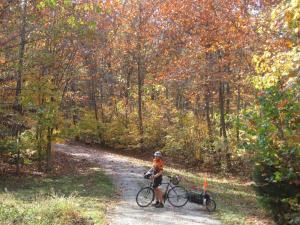 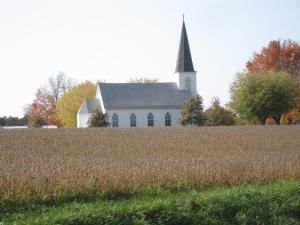 Today was more hills, trees, and wind, but also included the breathtaking "Crab Orchard Wildlife Refuge". We biked past two small lakes and then into a natural space that could not have felt more quintessentially "Autumn" if we were on the set of a movie. With golden leaves falling off tress and numerous trailheads on either side of the single-lane road, it was hard not to stop and go for a midday hike. We continued on and made it to Eddyville and the Hayes Valley Campground with plenty of daylight to spare. We had planned on setting up our tent and using the showers when an employee surprised us with the use of an RV on site! Yet another night in a home away from home. We really couldn't ask for more. We even got to watch the debates! 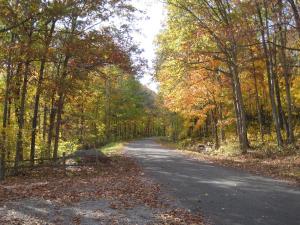 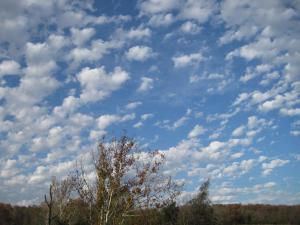 A few more random thoughts that didn't quite make their way into our narrative. Tomorrow we apparently get to take a ferry across the Ohio River...more to come on that. Throughout the country, it turns out that hunting is FAR more popular than I had ever realized. Now that we have moved into hunting season, we regularly hear gunshots in the forests surrounding our route. This is not something that is easy to get used to. And finally, we desperately want to show up to a town on a night when they are having a hay ride, or a haunted house, or a potluck dinner, or a chili-cookoff, or any sort of small town celebration. We always see signs for these events, but they are never on the right days. Hopefully the stars align and we find something soon.

And finally, for fun, here is what an average day looks like for us: 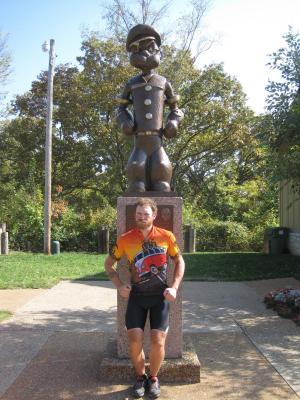