Sometimes throughout the day, we find ourselves talking about the things we absolutely love about touring...and the things we don't love. Here are a few of those things.

Like: The challenge of riding all day, even when we're tried and hot. Exercising for 8 hours a day, and feeling our bodies getting stronger. The freedom, no real schedule but our own, no responsibilities.

Dislike: The "off" days when you can't seem to get into the groove of riding, and everything makes you angry. For example, on the only day we've had bad head winds (so far), Adam was having an off day, getting hotter, and more tired, and angrier, until finally he yelled at the wind "Quit pushing on me!" It didn't oblige.

Like: The scenery, seeing it change from urban to rural, from hilly and green to flat farmland. Sleeping in a tent, and going to sleep when it gets dark, getting up when it 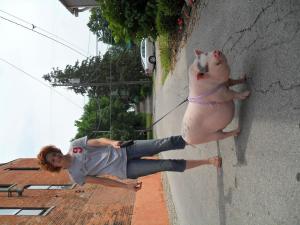 gets light. Icecream breaks. Eating in general-it's one of my top loves of touring or thru-hiking, that I can eat whatever I want! The pleasure of the little things, like taking a shower, or cold water. Which leads me to another like: Portland drinking water. We have yet to come to a town with water as good as Portlands!

Like: Smooth pavement. Every time we enter a new state, it seems the roads are in awful disrepair at the state line. It makes such a difference on the saddle side of things! Bike trails, especially the shady one's. As Adam has mentioned, we've been privilaged enough to ride on many of those. Seeing and living life at a slower pace. It doesn't happen automatically, but rather comes on gradually. At one point Adam mentioned a place being an hour from the city (Pittsburgh), and my first reaction was, "No it's not, that's 60 miles away, almost a full day!" There's somehting simpler about that.

Dislike: Mosquito bites, sunburn, chafing, and other forms of skin irritation. These are exacerbated by another dislike: that third day of riding in 90 degree weather, without a shower.

Like: Meeting new people, and gaining a renewed faith in humanity. We have met so many people that seem to be genuinely well intentioned, with no ulterior motive. One instance of this was in the town of Clyde Ohio. Adam and I bumped into a woman named Connie who was working on the garden portion of the firefighters memorial. We were headed out of town without a plan for where to stay. She directed us to go down to the park by the reservior, and camp there. She then told us where to get coffee in the morning. 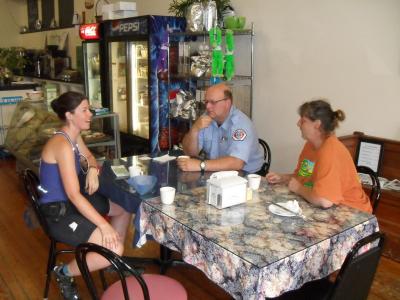 The next morning, she and her husband Al arrived at the coffee shop just as we were getting there. We had a great time talking with them about everything from beautifying the town, to pedi-cabs for taking seniors to the grocery, to the 5 bikes that Al owns. That was the kind of morning where we wished we didn't have so many miles to do, an that we could have stayed and talked all morning. Seeing friends and family is another like. So far we've visited people in Philly and Pittsburgh. We have friends in Chicago, IL and Madison, WI that we will be visiting, and then both have family in Montana.

Dislike: Road junctions with no signage. The worst was New Jersey, where we had to aks for directions about 12 times in the one day we were there.

Like: All the new experiences I've had. This was my first time to the east coast, and each state we enter is new to me. 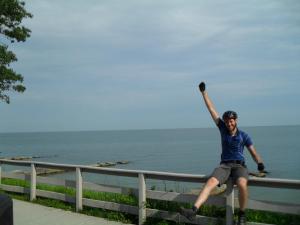 I had never seen lightning bugs before this trip. We experienced our first real thunder storm a few days ago. This is Adam at Lake Erie, another first time place. And finally, the sense of adventure and accomplishment that comes with doing new things and pushing one's physical and mental limits.

We've just entered Indiana, and with every new state I feel more and more accomplished. It's hard to stay present, and really truly experience each moment of tour, as it is hard to fully experience each moment of life. That being said, we are getting (relatively) close to our 1,000th mile. That really feels like an accomplishment, although I try to stay in the mindset that it's not about the miles, or whether or not we make it all the way from coast to coast. It's really that daily, moment to moment experience. And we'll feel really bad-a** when we get to Oregon!