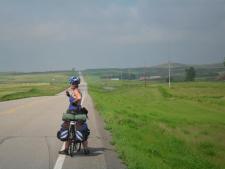 So, when Tiffany and I started this trip it was North Dakota that we were the most hesitant about travelling through. You know, you hear stories about how it's SOOO flat and SOOO boring and SOOO barren and next thing you know you're expecting a desert landscape that's flat as a board. The truth is North Dakota was one of the most pleasantly surprising states we've been through.

It's true the winds there are a bit ridiculous at times, but we started out with almost a full day 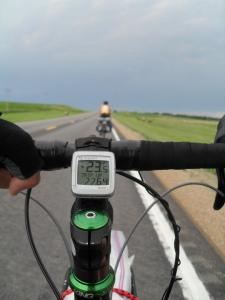 of tailwinds, which allowed us to do a 95 mile day by 4pm. Of course, that's when North Dakota got fickle and decided we'd be ending our day in a thunderstorm. First time we really got to use our rain gear though.

Anyway, as we were crusing along at 20-25mph, we began to realize that although ND is relatively flat, it's not at all the way that people make it out to be. In fact, now that we're in Montana, I'd say that eastern MT and North Dakota look very similar; lots of grasslands and ranches, rolling hills, more trees than in the midwest which is really nice and still quite a few corn and other fields as well.

The landscape isn't the only surprise in North Dakota 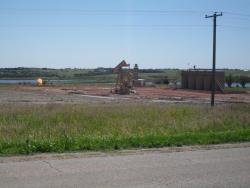 though. Did you know there's a HUGE oil boom going on there? Well, we didn't. It turns out that for the last few years the technology used for identifying underground oil reserves has been improving and subsequently uncovering previously unknown oil fields in the Western half of the state. It was interesting to watch oil wells slowly become a regular part of the country side as we went from Minot to Williston.

The heavy truck traffic created by the oil boom, as well as the reconstruction work going on in Minot was one factor that lead to us ending up on major highways for most of North Dakota, but the other was Devils Lake.

Located slightly northwest of the center of the state, Devils Lake has apparently been slowly expanding over the last several decades, wreaking havoc on the country side, necessitating new roads be built and actually leaving large swaths of land underwater. Apparently this is either due to an underground aquifer which cyclically raises and lowers the level of the lake, or (the more likely story) because although there are rivers feeding the lake, at lower water levels there's no rivers draining the lake. It would seem that every 70 years or so, the water reaches a level where there's a channel through which it can escape, allowing the water level to recede again. We thought this was a pretty interesting natural process/feature. 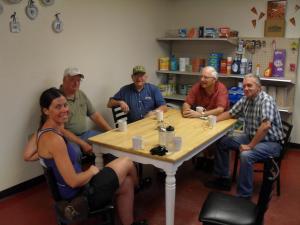 I believe we learned most of the truth behind all these stories from a group of farmers we met one morning at the only store in a TINY little town in western ND. We had stopped to get coffee and these guys filled in a lot of the blank spots in the stories we'd been hearing.