For real, it's not just something they talk about in folk songs!

So, we're at about 400 miles right now, in the town of Cumberland MD, and the big news for the day is the C&O Canal Towpath and the Great Allegheny Passage Trail. These two trails run all the way from Pittsburgh, PA to Washington, DC, with camping (free on the C&O) and amenities the whole way. We're doing it backwards apparently, but that might be a good thing, since we're getting the rough C&O section out of the way before continuing up into Pennsylvania on the (we've heard) nicer GAP trail.

The C&O section was definitely a little rough and slowed us down a bit, but it's totally rideable on a road or touring bike (though I'd recommend some wide tires, probably 25's minimum).The amenities were awesome, and even the water didn't taste that bad.

The G.A.P. trail is supposed to be a nicer surface, but the climb out of Cumberland is 23 miles long! After that it's all downhill to Pittsburgh though. We should be in PGH on the 4th (just in time for fireworks). And then we're headed up to the great lakes on the Adventure Cycling Association's Underground Railroad map.

I'm just about out of time at the library here, so I'll just post some photos of the trail. 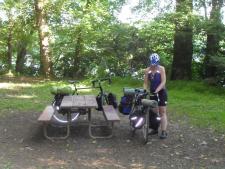 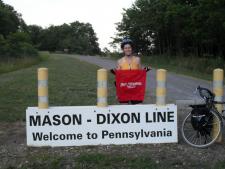 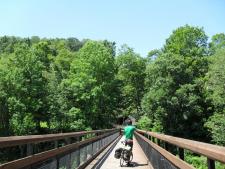 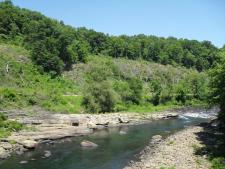