Berto and the Bears

Berto and the Bears

A true tale from the Oregon outback.

Our pre grad school annual backpacking trip was planned for the second to last weekend in September. Hot sun, clear skies, and not a worry in the world for three more days. We invited everyone. Even Berto. Berto had never slept in a sleeping bag, he had never slept outside, in fact, Berto had only been on two hikes in his entire life, yet we were going to take him backpacking.

The three-and-a-half-mile trek up to Duffy Lake, near Mt. Jefferson and Three Fingered Jack, is perfect for all beginners. With barely 650ft of elevation gain over the course of those three and a half miles, it is more of a stroll in the woods with a backpack than it is actual backpacking, but Duffy Lake is still in the wild, and that is what we needed. Because he was so new to the outdoors, I made sure I was available for all of his questions. The only question he asked, over the course of our preparations was plain and simple, “what about bears?”. Each time he asked the question I explained in detail, “In western Oregon, we only have black bears. And they are rare. They aren’t scary like their brown cousins. The only thing you need to know is that they are more scared of us than we are of them.” Each time Berto nodded, but you could still see the hesitation in his eyes.

We arrived to an overflowing trailhead parking lot. The people in fluorescent orange told us it was high Cascade buck deer season. The general consensus of the group was one of determination to drink boxed wine by an alpine lake, so regardless of the hunters we unloaded our gear and began our last-minute preparations. Berto’s scared look was enunciated by the Chuck Taylors on his feet and the twelve pack of beer strapped to the top of his pack. He was in all sense of the word, a “newb”. HIs scared look got brighter as two members of our party shouldered packs with giant bear mace canisters mounted to the hip belt. “What are those for?”, he exclaimed. They quickly dissipated his fears by repeating exactly the phrase I had told him several times before, but this time they emphasized how they usually hiked in Montana, where such an accessory was required. The beautiful hike up to Duffy Lake was full of laughter and deep breaths of mountain air. Even Berto enjoyed himself.

Upon arrival at a beautiful spot right on the lake, we quickly fell upon the tasks of erecting all of the camp infrastructure. My task was the bear hang. Berto wandered over to where I was looping counterbalances, and he inquired, “what is that for?”. Without thinking I replied, “why, this is the bear hang. It’s for all of our food.” After realizing the folly in my reply, I quickly followed up with how the bear hang is more for rodents than bears, and that there aren’t bears in the area. Bullet dodged.

The wine began to flow, and we swam in the crystal-clear lake with deer hunter’s rifle shots echoing around the canyon. One shot rang louder than most and it was at the far end of the lake. It was followed by a more rapid sequence of six shots. I knew what this meant, however, I didn’t say a word.

As if fate decided the coincidence of events, we dried off from our swim just as a hunter was bounding down the trail in excitement. I asked the obligatory, “any luck?”. Without any words, he turned around to reveal a bear hanging from his external frame backpack. Uh oh.

Berto didn’t sleep that night. He blamed the wine, the hard ground, and the snores of his tent mate, however, I know the truth. Berto’s worst nightmare had come to life and he very clearly understood that there are bears out in the woods regardless of what his friends tell him. 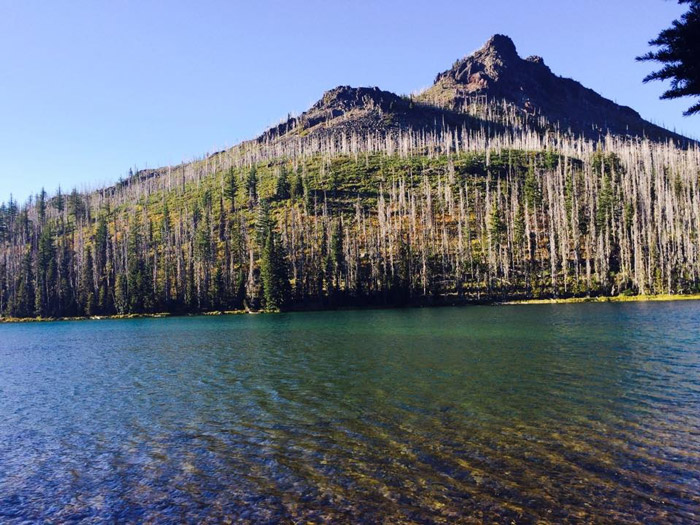