Beautiful Leverich Park in Vancouver Washington was the setting for the 2011 Bad Monkey Open disc golf tournament.  This PDGA C tier event is for amateurs only.  Normally Leverich Park is a 12 hole disc golf course, but for the Bad Money Open a 13th hole is added.  A minimum of 13 holes is required for an event to be PDGA sanctioned.  Special basket locations are used for this event as well including a challenging island hole on twelve.  The upper parking lot is closed, and twelve’s basket is placed in the natural area which is in the middle of the parking lot. 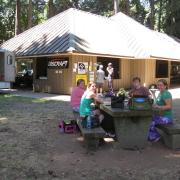 The player’s packs were awesome two discs, Bad Monkey tee shirt.  There were two pools, and everyone played two rounds on Saturday.  Things ran super smooth thanks to Firefly Productions Steve Carson & Flight Team member Ryan Gwillim along with several volunteers Jason Pinkal, and Flight Team member Dan Carpenter.   There were 3 advanced ladies, and 6 intermediate ladies.  Pretty good showing form the ladies.  I had a great time playing with Chris & two of the intermediate ladies in the first round. 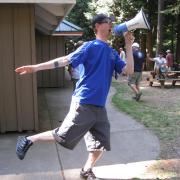 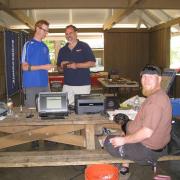 Sunday everyone played one rounds.  My pool played the morning round starting on hole 9B, which is an added hole that shot off of a high bank through some trees, and over a creek & a path both of which are out of bounds.  I was the first to drive on our card, so I grabbed my trusty back up Innova 162 TL because I did not want to risk losing my main TL in the creek because it is a double ace disk (an ace is like a hole in one in stick golf), and my go to for straight tight shots.   When start is called I drive off the tee, and it looked like a pretty good shot clean through trees.  Well it actually found it’s way into the basket BANG! I got my first tournament ace.  What a thrill, and it was my first throw of the day.  The ace pot was $250 in Bad Monkey Bike Script.  There were four aces on the weekend, so my share was $67.

I managed to shoot pretty well all weekend, and came out on top of the women’s advanced division.  The top 4 advanced men played a final 9 holes to determine the winner their division.  The final nine holes are a little different, and much more challenging.  The top 4 advanced men were Michael Medlock, Mike Ward, Johnny Lamotte, and Seth Herwitz.  Michael managed to play strong, and finished on top with Mike in 2nd, a Johnny 3rd, and Seth 4th.   After the final nine was completed I ran a very warm ring of fire with lots of awesome prizes provided by Bad Money Bikes, Next Adventure, Powgnar, and the Chick Flick.  Following the ring of fire was the awards ceremony, and then the 2011 Bad Monkey Open was complete. 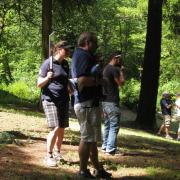 Many thanks to Bad Monkey Bikes the awesome sponsors of the Bad Monkey Open, and  Steve & Ryan of Firefly Productions, and all the volunteers who helped make this such an awesome event.  Also thanks to all the ladies I played with all weekend and the two guys Michael & Matt.
Share
Share
Tags: cindy mcmahan, disc golf
Prev Post
Next Post